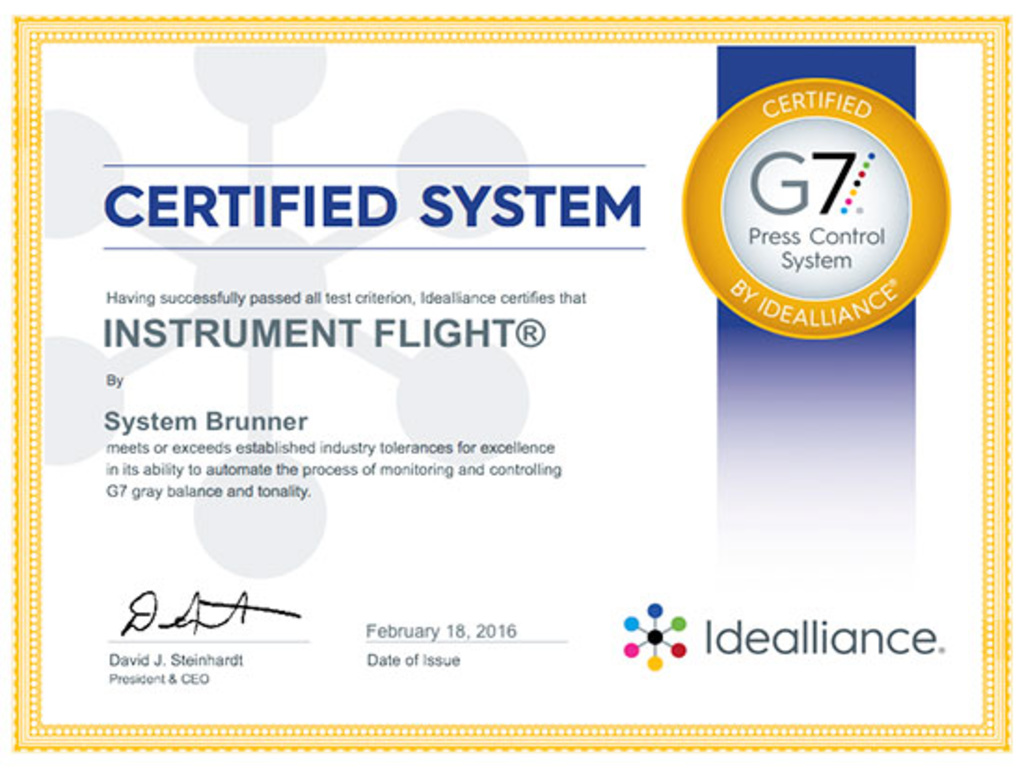 “Even when solid ink densities or solid LAB values remain consistent on a G7-calibrated press, significant mid-tone gray variations – up to 12 Delta E – can occur during a production run, resulting in visible color shifts that must be corrected by ink key adjustments or other means. To aid these adjustments, the press operator needs a real-time indication or an automated solution of how gray balance and neutral density compares to the G7 aim values, and how each ink needs to be increased or decreased” commented Don Hutcheson, of HutchColor, LLC, who directed the Idealliance G7 Press Control System Certification Program development.

In addition to G7 metrics, INSTRUMENT FLIGHT also monitors and controls TVI (dot gain) in the individual colors, the spread of TVI, solid ink densities, L*a*b* colorimetric targets and more of a reference print condition or standard such as GRACoL®, ISO-12647-2 or the System Brunner Globalstandard®. INSTRUMENT FLIGHT is able to prioritize the different metrics according to different requirements, e.g. G7 settings.

Addressing the value of G7-based press control, Mike Graff, President and CEO of Sandy Alexander, commented, “Sandy Alexander was one of the first adopters of G7 and we continue to rely on its methodology to support our position in the industry as a quality leader. As the first adopter of System Brunner’s Instrument Flight technology in the US (before the introduction of G7), we are eager to benefit from its new G7 capabilities, as we can now control the complete reproduction workflow from proof to printed sheet, according to G7 specifications. This system will help us maximize the value we get from G7 – greater predictability, shorter make-ready times, and more consistent printed results that meet the highest quality levels.”

Information on the G7 Press Control Certification Program can be found at www.idealliance.org

No comments to show.